“A Dream of Red Hands” by Bram Stoker

The first opinion given to me regarding Jacob Settle was a simple descriptive statement. “He’s a down-in-the-mouth chap”: but I found that it embodied the thoughts and ideas of all his fellow-workmen. There was in the phrase a certain easy tolerance, an absence of positive feeling of any kind, rather than any complete opinion, which marked pretty accurately the man’s place in public esteem. Still, there was some dissimilarity between this and his appearance which unconsciously set me thinking, and by degrees, as I saw more of the place and the workmen, I came to have a special interest in him. He was, I found, for ever doing kindnesses, not involving money expenses beyond his humble means, but in the manifold ways of forethought and forbearance and self-repression which are of the truer charities of life. Women and children trusted him implicitly, though, strangely enough, he rather shunned them, except when anyone was sick, and then he made his appearance to help if he could, timidly and awkwardly. He led a very solitary life, keeping house by himself in a tiny cottage, or rather hut, of one room, far on the edge of the moorland. His existence seemed so sad and solitary that I wished to cheer it up, and for the purpose took the occasion when we had both been sitting up with a child, injured by me through accident, to offer to lend him books. He gladly accepted, and as we parted in the grey of the dawn I felt that something of mutual confidence had been established between us.

The books were always most carefully and punctually returned, and in time Jacob Settle and I became quite friends. Once or twice as I crossed the moorland on Sundays I looked in on him; but on such occasions he was shy and ill at ease so that I felt diffident about calling to see him. He would never under any circumstances come into my own lodgings.

One Sunday afternoon, I was coming back from a long walk beyond the moor, and as I passed Settle’s cottage stopped at the door to say “how do you do?” to him. As the door was shut, I thought that he was out, and merely knocked for form’s sake, or through habit, not expecting to get any answer. To my surprise, I heard a feeble voice from within, though what was said I could not hear. I entered at once, and found Jacob lying half-dressed upon his bed. He was as pale as death, and the sweat was simply rolling off his face. His hands were unconsciously gripping the bed-clothes as a drowning man holds on to whatever he may grasp. As I came in he half arose, with a wild, hunted look in his eyes, which were wide open and staring, as though something of horror had come before him; but when he recognised me he sank back on the couch with a smothered sob of relief and closed his eyes. I stood by him for a while, quiet a minute or two, while he gasped. Then he opened his eyes and looked at me, but with such a despairing, woeful expression that, as I am a living man, I would have rather seen that frozen look of horror. I sat down beside him and asked after his health. For a while he would not answer me except to say that he was not ill; but then, after crutinising me closely, he half arose on his elbow and said-

“I thank you kindly, sir, but I’m simply telling you the truth. I am not ill, as men call it, though God knows whether there be not worse sicknesses than doctors know of. I’ll tell you, as you are so kind, but I trust that you won’t even mention such a think to a living soul, for it might work me more and greater woe. I am suffering from a bad dream.”

“A bad dream!” I said, hoping to cheer him; “but dreams pass away with the light-even with waking.” There I stopped, for before he spoke I saw the answer in his desolate look round the little place.

To read the rest of this story visit:
“A Dream of Red Hands” at bramstoker.org

“One Thing Needful” by Bram Stoker

“One Thing Needful” is a poem by Bram Stoker. It was first published in the US on December 10, 1885 in The Youth’s Companion, Perry Mason & Co., Publishers, Boston, MA.

For more information and a copy of this poem visit:
“One Thing Needful” at bramstoker.org 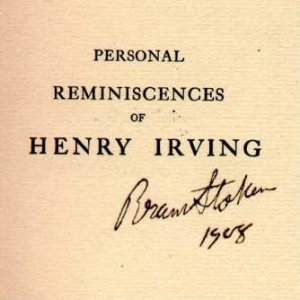 “The Tendency of the Modern Stage” by Bram Stoker.

This piece was a nonfiction article by Bram Stoker. This article was the third in a series of interviews that Stoker conducted in 1907. It was first published in the US in 1907 in the New York World, New York.

For more information and a copy of this interview visit:
“The Tendency of the Modern Stage” at bramstoker.org

“An Interview with Winston Churchill” by Bram Stoker

This piece was a nonfiction article by Bram Stoker. It was the second in a series of interviews that Stoker conducted in 1907. It was first published in the US in the October 5, 1907 issue of the New York World, New York.

For more information and a copy of this interview visit:
“An Interview with Winston Churchill” at bramstoker.org